Alan Dunaway (アラン・ダナウェイ, Aran Danawei?) is one of the playable characters in Time Crisis 3, regardless of the edition. Alan takes control as Player 1.

Alan has a shoulder-length brown hair and blue eyes.

He wears a black tanktop covered by white jacket with few red colors and a black pants also wears red and white sneakers with black stripes. Alan also wears green sunglasses that hangs above and never uses it to cover his eyes.

Alan joined the V.S.S.E. at the same time as Wesley Lambert, and was a good friend of Wesley's even before they joined the agency. He has been an operative for 4 years. Alan has a talent for mastering new skills quickly, and is best known for his reputation for unparalleled fearlessness in the face of incredible odds. While cool and attractive, he's a natural team player. He used to pull pranks on the other agents (allies or friends), but almost never gives up on his mission as a V.S.S.E. agent. Alan's proven record in only 4 years earned him the respect of many other seniors before him.

Although Alan and Wesley were V.S.S.E. agents only for 4 years, they were already far and away trustworthy, as they were qualified to act as officers in a simulation fight for newer agents based on the Astigos Island Crisis. Both served as the final test newer agents (up until the Hamlin Battalion incident) must surpass as a part of the undeniably high amount of battery and aptitude of training agents must undergo before becoming fully-pledged V.S.S.E. agents. 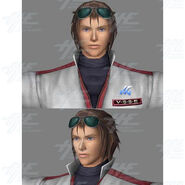 With Wesley Lambert and in civilian disguise

As a cameo in Time Crisis 4