Alicia has pinned blonde hair with fringe and blue eyes.

Alicia wears a green short dress army suit that is brown color on the shoulder areas and has a red frame at the end on the collar. She also wears a black belt that has a silver buckle, a pair of brown gloves, and a black and red watch on her left wrist. She also wears green socks and brown boots. In her disguise, Alicia wears a red scarf, a white bikini covered with an opened cyan 3/4 sleeves shirt, and a brown miniskirt with a pair of Emperor-styled sandals.

Alicia single-handedly infiltrated a Zagorian coastal battery turret in order to find out what the Zagorians were up to. Upon breaking in and clearing any enemy resistance, she learned that the Zagorians were hiding four missiles that could threaten the nearby area. Successfully downloading the information, she called the V.S.S.E.. The Head of V.S.S.E. thanked her for the crucial information and told her that they were sending in Alan and Wesley to land at Marano Beach at 0800 hours. Alicia attempted to make her way to the beach, but was spotted by Zagorian forces and battled through a large company.

She managed to find a jeep and saved Alan and Wesley before Victor could kill them. After killing Victor, Alicia introduced her to the V.S.S.E. agents and informed them about the situation on Lukano. In another town, Alicia informed them that the tactical missiles were hidden in the military facility located at the summit of a mountain and that the only route to get there was to use a transportation train located at the far side of the town. Shortly after, they were attacked by more Zagorians. Alicia informed them to arrive at the supply station by 1500 hours before they split up. After defeating more Zagorian soldiers and snipers, She eventually found Jake, though he revealed his true colors and attempted to bring her in. After a battle in the town which resulted in Jake being defeated, Alicia wanted answers from him but a jeep arrives, forcing her to dodge while Jake boards it. After firing a shot at the jeep which destroyed its right side mirror, Alicia knew that she had to get to the supply station.

The three boarded the train, where Randy and his men ambushed them. Alicia fended off the attacks of a Clawman before repelling Zagorian forces, including an armored assault train. While Alan and Wesley fought Randy, Alicia dealt with multiple snipers that tried to kill them. They later made their way to the instillation on foot after Randy was killed.

Arriving at the exterior of the military facility, Alicia saw Giorgio Zott torture her brother which prompted Alan and Wesley to storm the area to defeat the Zagorian soldiers while she rescued her brother. When Giorgio pointed his gun at Daniel with the V.S.S.E. agents hesitant on dropping their weapons, Alicia landed a well-timed shot on the Zagorian general's handgun, causing him to flinch. As the V.S.S.E. agents pursued Giorgio, Alicia was happy to reunite with her brother again. Daniel told her that he would catch up after taking a breather, and told Alicia to free the rest of the men. Alicia freed the remaining prisoners and saved Alan and Wesley from being killed after they fell into a trap. The Lukano Liberation Army soldiers later saw Jake attempting to flee the area but a main battle tank crashed in and aimed at them. Daniel told Alicia to pursue Jake while he dealt with the tank.

Alicia dealt with all of Jake's soldiers, and killed him before he could detonate the warhead. By this time, Alan and Wesley had killed Giorgio and stopped the missiles. Alicia said farewell to the V.S.S.E. agents and alongside her brother and fellow comrades, drove the Zagorias Federation Army remnants off Astigos Island. 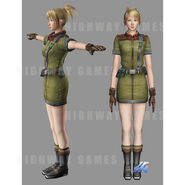 Alicia runs in her disguise before Stage 3 Rescue Mission begins