Lynch has brown hair that is shaved to almost bald and black eyes.

Lynch has gray hair which is of shoulder length and red eyes. He also has gray full beard and a earring on his left ear.

Lynch wears a dress uniform which is a light brown double-breasted shawl lapel coat, and matching pants folded in military style. On the coat, there are three dark brown buttons on the front, light-brown epaulettes secured by gold buttons, a lapel pin on the left side lapel, service ribbons on the upper right side, a name tag on the upper left side, an emblem on the upper left sleeve, and a brown belt that has an engraved gold buckle on the waist area. There is a black-brown collared shirt and brown tie underneath the coat. He also wears a navy-green beret that has an emblem, brown elbow gloves, a gold bangle on the left glove and black combat boots.

Lynch is an American.

He is the leader of a terrorist organization called the U.R.D.A., which is responsible for occupying Garland Square on 16 October 2000. Lynch invaded the complex with no demands and no hostages, causing a string of confusion within intelligence officials from around the world, including but not limited to the United Nations, the British SAS, and the V.S.S.E.. What is known is that Lynch intended to blockade and occupy the complex with a hidden agenda. He has two bodyguards named Tiger and Edge. In the game, Lynch planned to overload an experimental nuclear reactor at the complex's test site, Geyser 1. S.T.F. members were able to shut down the machine, killing Lynch in the process. After Lynch's death, Jared Hunter becomes second-in-command. In combat, he uses a strange-looking high-gauge semi-automatic shotgun and RGD-33 stick grenades.

Derrick Lynch is named after an employee of Namco who created Time Crisis II.

Ready to attack the S.T.F. members

Shot by the S.T.F. members, leading to his death
PS2 version 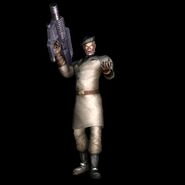 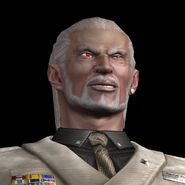 Ready to attack the S.T.F. members

Shot by the S.T.F. members, leading to his death

Falling after being shot