Edge (エッズィ, Ezzi?) (also known as Edgey in the arcade version) is an antagonist in Time Crisis: Crisis Zone. He was one of the three second-in-commands of the U.R.D.A. and a bodyguard for Derrick Lynch.

Edge wears a half-sleeved shirt of green tigerstripe pattern, red collar and gray lower sleeves, gray pants and gray combat boots with two brown stripes. He also wears a red beret and shades. As for equipment, there is body armor on the abdomen area and armor plates over the upper shoulder joints. As for weapons, he is armed with double wolverine-style melee blades attached to each wrist. Said melee blades can be thrown as projectiles via swinging them but can be shot down.

Edge wears a short-sleeved polo shirt that is dark green on the chest area and light green on the shoulder areas, with body armor over it, pants of jungle camouflage folded in military style with a green belt that has a silver buckle around his waist and black combat boots. He also wears purple-tinted shades and black fingerless gloves. Like his partner Tiger, he does not wear the beret, revealing that he is bald. As for equipment, there is a long case box attached to the back of his pants. As for weapons, he is armed with double wolverine-style melee blades attached to each wrist.

Edge was once a student of ninjutsu until he was expelled for his violent tendencies. After this, Edge became a mercenary and eventually met Tiger, whom he befriended. After Derrick Lynch was arrested, Edge persuaded Tiger to help him break Lynch out of prison. After this, Lynch appointed Edge and Tiger as his lieutenants and bodyguards within the U.R.D.A.. In combat, Edge was a fearsome opponent, using wolverine-style melee blades which can also be thrown as projectiles via swinging them. He was also agile and fast, traits perfected during his days as a ninja-in-training. Tiger tried to throw a grenade at Claude McGarren and his team but Edge falls on him causing the grenade to explode, killing both of them. 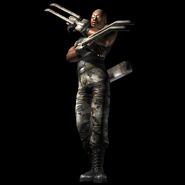 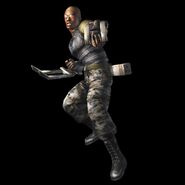 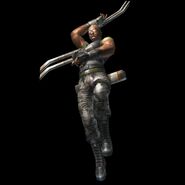