The GunCon (or G-Con-45 in Europe), often abbreviated as G-Con, is a PlayStation controller, and the official Time Crisis controller, made by Namco.

It is the predecessor to the GunCon 2 and 3.

The GunCon controller (known as G-Con 45 in Europe) uses the cathode ray timing method to determine where the barrel is aimed at on the screen when the trigger is pulled. It features a button below the barrel on either side of the gun (buttons A and B, both performing the same function) for auxiliary in-game control, such as to take cover and reload in Time Crisis. The controller is released in black in Japan, and gray (and eventually, in orange) in both Europe and North America. The controller is compatible with some PlayStation 2 GunCon titles, but is not compatible with PlayStation 3 due to its lack of controller ports. 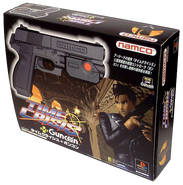 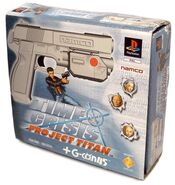 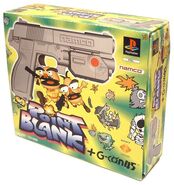 Retrieved from "https://timecrisispedia.fandom.com/wiki/GunCon?oldid=16034"
Community content is available under CC-BY-SA unless otherwise noted.