The unit went rogue by helping the enemies of the free world. Their leader is Lieutenant Colonel Gregory Barrows. The climax is fought in an air force base at Colorado as they tried to launch UCAVs to cause mass destruction in all major U.S. cities.

Their namesake stems from the Pied Piper of Hamelin as the Terror Bites are designed to follow orders via sound waves.

Comprising of the best U.S. soldiers from the Army, Air Force, Navy and Marine Corps, and under the command of the Army, the Hamlin Battalion was formed after the Second World War as a top secret unit which specialized in the training of animals for military use. However, knowledge of its existence was limited amongst the chain of command and never made public because of its inhumane nature.

Initially, the trained animals were mainly used for mine clearing, but in the 1990s, the Hamlin Battalion began to shift its focus to the manipulation of genetically enhanced creatures for use in battle while continuing its research in secret. However, practical application of the research was difficult and several soldiers died while conducting experiments. In fact, there were numerous incidents which were either not made public or were covered up such as an incident which a research subject managed to escape the facility, requiring the destruction of an entire island to take care of it, and the incident being covered up as a missile test.

After the destruction of Dam #18 in California which resulted in Lieutenant General Larry Garfield approving the V.S.S.E. involvement to assist Captain William Rush, the details of the Hamlin Battalion are made public, eventually labeling this unit as a terrorist organization.

The leader-in-chief of the Hamlin Battalion, Barrows had the entire unit go rogue due to his poor treatment in the military. He attempted to terrorize the country by using Terror Bites his men have stolen. In an attempt to destroy the cities before he is stopped, he launched numerous UCAVs to fire nuclear cruise missiles at major cities in the U.S.. When the U.S. military and the V.S.S.E. agents counterattack the AFB he has occupied, he launches the UCAVs and destroys the stairs leading to the missile self-destruct controls. He is killed by the V.S.S.E. agents who managed to destroy the missiles in time.

A member of the Hamlin Battalion and leader of the second company, Jack is sent by Barrows to steal more Terror Bites in a research facility in Wyoming for their cause. He encounters Rush and the V.S.S.E. agents at the facility and engages them in combat. He battles the trio, especially Rush who attacks him constantly and asks him why he is betraying his country. Mathers tells him that "his" orders are absolute and severely beats up Rush, but is defeated after the latter launches a devastating uppercut punch on him. He is believed to have bled out after receiving the uppercut so hard on the jaw, sending him flying to the inside of the storage, not before telling the trio that they are too late.

A member of the Hamlin Battalion, Frank is the brother of Jack Mathers sent to occupy Dam #18 in California to distract the main unit which is trying to steal more Terror Bites in a research facility in Wyoming for their cause. Unlike his brother who is loyal to Gregory Barrows, he is loyal to the Hamlin Battalion. He encounters Rush in the power facility and when Rush said that the Hamlin Battalion is only stealing Terror Bites for the purpose of making money, he counters by telling Rush to not compare him to the backstabbing traitor (Marcus Black) and instead telling that he's going to tear his country apart which made him feel good. After a battle, he triggers a detonator which destroys the outer walls of the dam in an attempt to take down Rush with him. He is last said having completed a mission for his brother before dying due to the dam being destroyed.

A member of the Hamlin Battalion and leader of the third company. Black held a low position in the U.S. military due to their harsh treatment for special operations units. In addition, he is unhappy for receiving payment cuts for the front line missions he frequently undertakes. Hence, he is strongly disappointed with the U.S. military and the government. To fulfill his interest of money, he broke apart from the battalion and attempted to sell a truck shipment of Terror Bites to the terrorists at an agreeable price. The truck is intercepted by the V.S.S.E. agents and Rush, resulting in a battle in the city. Despite his use of a custom-made Barrett M107 anti-tank rifle in one hand, a compact grappling hook to swing from high places and hurl heavy objects, infantry soldiers, and Terror Bites, he is killed by Rush, who then reveals that Black's men were from the U.S. military and not terrorists. Rush refuses to believe that "he was fighting against his own men" all along, prompting the V.S.S.E. agents to "do some more investigation". 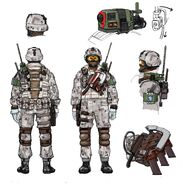 Inhumane nature of the unit causes denial of its existence

Problems of applying its research

Cover-up of the failed experiments by the U.S. military

Name of the unit. Note that it is spelled with an extra "E"

Trying to avoid leaking of the Terror Bites incident

Lieutenant General Larry Garfield taking full responsibility for his actions. This probably led to the details of the Terror Bites incident and the Hamlin Battalion being made public
Time Crisis Franchise
Retrieved from "https://timecrisispedia.fandom.com/wiki/Hamlin_Battalion?oldid=16153"
Community content is available under CC-BY-SA unless otherwise noted.