Hunter has light brown hair that is shaved to almost bald and brown eyes. There are tattoos on his right shoulder, upper right arm and right side face.

Hunter is naked from waist up, wears green pants folded in military style with a green belt that has a silver buckle around his waist and green combat boots. He also wears green fingerless gloves. During combat at Belforte Hotel, he wears a jetpack and is armed with an AR-15 style assault rifle. When pursued by Claude McGarren while escaping via military cruiser, he is armed with a modified HK PSG-1 sniper rifle.

Hunter took over the U.R.D.A. after the death of Derrick Lynch. To exact his revenge on the S.T.F., he gathered the remnants of the U.R.D.A. and occupied Grassmarket Street and Belforte Hotel six months after Garland Square is recaptured by the S.T.F.. As an insurance policy, he kidnapped Melissa Kessler, the daughter of the S.T.F. commander and demanded the release of all U.R.D.A. soldiers imprisoned by the British authorities. After the S.T.F. secured Grassmarket Street and stormed in the hotel, he appears in a jetpack, armed with an AR-15 style assault rifle and is with two "Paratroopers". He tells the S.T.F. that he could not believe that they have made it that far but warns them that their luck has run out and that he is going the score once and for all. After a battle at the hotel, he is defeated and tricks the S.T.F. by jumping off the hotel. Of course, there is a military cruiser at the bottom receiving him and it speeds away, prompting Claude McGarren to pursue him via helicopter. After a battle off Crimson Beach, Hunter let out one final scream of rage before the military cruiser explodes, killing him and signalling the end of the U.R.D.A. 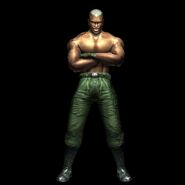 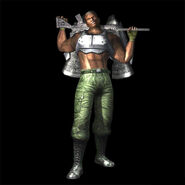 With sniper rifle. Note that he is armed with an AR-15 style assault rifle with the jetpack. 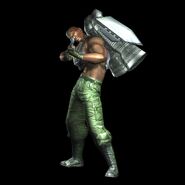 With a "Sharpshooter" class soldier

Shooting with a "Paratrooper"

Armed with a sniper rifle to shoot Claude McGarren