Little is known about this mysterious woman. Established long before the formation of the Sercian Republic, her self-named Kantaris Organization was responsible for a number of large-scale crimes including arms dealing, drug dealing, theft, forgery and fraud. It is known that she is the Wild Dog Organization's chief arms supplier. Kantaris also owns the Chateau de Luc, a luxury hotel that serves as a front for a weapons factory.[1]

A few weeks after the Sercia incident, Richard Miller is sent to infiltrate Chateau de Luc and destroy the operations. Depending on the performance of the player, Miller kills Kantaris either by shooting down her airplane as it escapes, shooting her escape car until it crashes and explodes, or by disabling her war-robot until it malfunctions and makes her fall to her death. If the player is too slow, Kantaris will instead escape.

Kantaris is confirmed to still be alive in Project Titan[2], in which she works with Wild Dog to build a robot army. She and her henchman Zeus Bertrand capture a V.S.S.E. mole named Marisa "Abacus" Soleil and have her imprisoned on her personal yacht. Miller infiltrates the yacht to rescue Marisa, but does not confront Kantaris; rather, she has already escaped by the time he boards. Kantaris is still presumed to be at large. 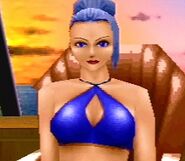