Rachel MacPherson (レイチェル・マクファーソン, Reicheru Makufāson?) is the daughter of Sercia's most important founders of Sercia's modern-day democracy. Bred from William and Nicole, the majority of Rachel's personality came from that of William, as she emerged from a hostage to a democratic politician.

Born on 1975 in the City of Voruta in Sercian Republic as heir to the heroic family of the Sercian Revolution that transformed Sercia into a "problem-solving" third party nation. Rachel graduated from High School with top honors and with several scholarships that earned her a place in Sercia's Clarence Lutzenkirchen University in Voruta. She is a Biochemist Major, hoping that she will be able to use these techniques to help out the VSSE in identifying invisible enemies in this future.

She is currently held captive through the hands of Sherudo Garo and Wild Dog arrives the Northwest Island are kidnapping her. Garo demands that William MacPherson resigns his presidency with a given amount of time and to name Garo as "a dictator for life" in exchange for Rachel's life. The VSSE does not want this to happen because they fear that in forcing William to give up his presidency in exchange for Garo being the "dictator for the rest of his life", Sherudo will transform Sercia back to the way it was: a Monarchy. To prevent the kidnapping, VSSE dispatched Richard Miller to rescue and save her at all costs. 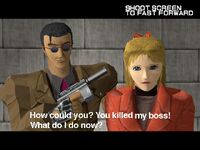