Sherudo Garo (シェルード・ガロ, Sherūdo Garo?) was the last blood relative of the Sercian royal family who desired to become the president of the newly appointed Republic of Sercia. He serves as the main antagonist and boss of stage 2 in the original Time Crisis.

Garo has short reddish-blonde hair and gray eyes. In the PS version, he has blue eyes.

Garo wears a suit which is a white double-breasted notched lapel coat with four purple buttons, and matching pants. There is an orange collared shirt with a green cravat underneath the coat. He also wears bluish-white shoes.

An expert knife thrower and former Dictator of Sercia, Sherudo was born in the Garo Royal Family, the infamous monarchy that ruled Sercia for over 500 years[2] until said monarchy was overthrown in the Sercian Revolution by William MacPherson, who later went on to be president of the newly-established Republic of Sercia. Garo has spent three months plotting to re-establish his rule, hiring the notorious mercenary, Wild Dog, and his organization to carry out his plan.

Garo abducted the president's daughter, Rachel, and threatened to kill her unless President MacPherson resigned from office and reinstated him into the throne. Unfortuantely for Garo, President MacPherson ended up enlisting the help of the V.S.S.E., who sent the one-man army, Richard Miller, to infiltrate Garo's castle. Richard defeated countless waves of Wild Dog's troops, and then made it to the top of the tower where Garo lay in wait.

Although Garo fought Richard valiantly utilizing throwing knives, his plan was foiled when the agent fatally shot him, finally putting an end to the Garo family's bloodline. 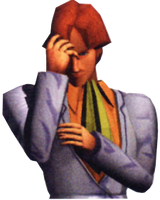 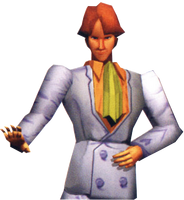 Sherudo, as he appears in the arcade version

"Since you have traveled so very far, be my guest and let me entertain you!"

Facial closeup in the arcade version

Facial closeup in the PS version. Note the difference in eye color