Tiger (タイガー, Taigā?) is an antagonist in Time Crisis: Crisis Zone. He was one of the three second-in-commands of the U.R.D.A. and a bodyguard of Derrick Lynch.

Tiger wears a half-sleeved shirt of yellow-brown tigerstripe pattern and red collar, brown pants and gray-blue combat boots. He also wears a red beret, a visor and gray gloves. As for equipment, there is a body armor over the shirt and armor plates over the upper shoulder joints. There is a case box strapped on each pant leg and a large one attached to the back of the body armor. As for weapons, he is armed with a XM29 OICW of 1996 model.

Tiger wears a short-sleeved navy blue shirt with body armor over the front (only the straps are seen at the back and the large case box is absent), pants of jungle camouflage folded in military style and black combat boots. He also wears a visor, a radio transmitter mounted behind his left ear and black gloves. He does not wear the beret, revealing that he is bald. As for weapons, he is armed with a modified XM29 OICW of 1999 model (it lacks the grenade launcher and buttstock).

Tiger was feared within the U.R.D.A. for his great strength, which he used to lift or toss heavy objects as weapons. The heaviest item he was seen lifting was a construction beam, which he used like a club. Tiger was also an accurate shot with an assault rifle. On defeat, Tiger attempted to throw a DM51 hand grenade (Mk 2 hand grenade in the PS2 version) at the S.T.F. but his partner Edge crashed into him while the pin was out, causing the grenade to blow both of them up.

"Nobody can defeat us!" 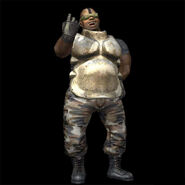 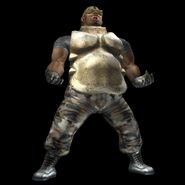 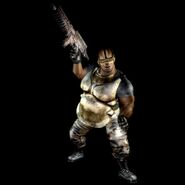 "Nobody can defeat us!"