Time Crisis (タイムクライシス, Taimu Kuraishisu?) is a light gun shooter arcade game released by Namco in 1995. It was later ported for the PlayStation in 1997, bundled with the GunCon controller.

Time Crisis is a 3D first person rail shooter. The player aims and fires at on-screen enemies with a light gun. In addition, Time Crisis allows players to duck behind cover to avoid enemy fire and reload his or her weapon. The game consists of three 3 stages, each with three areas and a boss fight.

Features unique to Time Crisis include:

Year 1996, finally the people of Sercia overthrew the Imperial Rule of Sherudo Garo, a cruel dictator who's the last of his family. Then the country's first democratic president was elected, President William MacPherson. Garo had then started allies with a terrorist organization, Wild Dog, so he could take back the country.

Rachel was taking a break on her university campus to enjoy the August sun, until something happened...

A helicopter landed nearby and a man walked out to her and asked her if she was Rachel. He then grabbed her, pulled out a gun, and forced her onto the helicopter and left. Rachel was kidnapped!

During this time, there was a celebration for the country being freed. While President MacPherson was happy, one of his assistants ran in reporting that Rachel was kidnapped by Wild Dog, under the orders of Sherudo! The president of Sercia immediately calls the V.S.S.E. and hopes their top agent will get his daughter back…

The man on the video tape smiled. He held a knife in one hand, Rachel's hair tightly gripped in the other. "Such a lovely face. It would be shame if harm should come to it. President MacPherson, you have until sunset tomorrow to resign and reinstate me as ruler of Sercia and I'll let the girl live." Sherudo's image faded to black. "No way we are letting that madman back into power," the V.S.S.E. team Director said. "That castle is going to be filled with Wild Dog thugs and who knows what else. Can your man handle an infiltration?" Porter Davis pushed the transmit key on his laptop, sending the encrypted data speeding through cyber-space. "Mr. Director, if Richard Miller can't get her out of there alive, no one can."[1]

"Richard, there's an emergency. There's been a kidnapping! It's Rachel, the daughter of the president of Sercia! The kidnapper is believed to be Sherudo, the last blood relative of the royal family. He lives in an old castle on the northwest island. He's demanding military secrets in exchange for Rachel's life! The deadline is sunset. We don't have much time! Get into the castle and rescue Rachel! The organized crime syndicate "Wild Dogs" is also known to be involved. Good luck, Richard," The voice of Porter Davis ends on Richard's laptop computer, and Richard stands up and grabs his gun, loading in the clip fully.

The main plot of Time Crisis involves an attempted coup in the fictional republic of Sercia. For over 500 years[2], the Garo family ruled Sercia with an iron fist (leading one historian to liken the Garo Imperial rule to "Exceeding the combined cruelty of Stalin, Hitler and Vlad the Impaler.")[2]. In 1995, William MacPherson, sent by the V.S.S.E. International Intelligence Agency, successfully toppled the Garo regime and became its first democratically-elected president.

Sherudo Garo, the last remaining member of the Garo family, seeks to recapture the throne. He hires Wild Dog, the leader of a criminal syndicate, to kidnap the president's daughter, Rachel. Garo demands military secrets in return for Rachel's safe return, or he will kill her by sunset. V.S.S.E. sends its best agent, Richard Miller (nicknamed "The One-Man Army"), to infiltrate Garo's castle and rescue Rachel.

Miller confronts Wild Dog on a bridge outside of the castle. Wild Dog begins detonating the castle and plans to fly away on a helicopter, shooting Rachel in the arm as she tries to escape. After a fight, Miller shoots Wild Dog, causing him to drop his radio detonator and become engulfed in the destruction, losing his left arm in the process. Richard and Rachel escape as Sherudo's castle goes down in flames.

The Kantaris Deal is a special side-story exclusive to the PlayStation version of Time Crisis. Miller recieves orders to infiltrate a mysterious hotel known as Chateau de Luc, which is operated by Kantaris, leader of the smuggling network of the same name. The V.S.S.E. confirms that Kantaris supplied arms to Wild Dog, and tasks Miller with disbanding the organization.

The player's performance will alter the routes Miller takes through the game, and subsequently how the mission occur: Miller may face off against Kantaris' pet cyborg "Web Spinner" in the ballroom; a giant robot in the lounge; a Spider-like tank in the parking lot, or the Kantaris gunship at the heliport.

There are also two endings. If the player manges to gun down Kantaris's car, destroy the robot in enough time so that it pushes Kantaris out the window, or shoot down the gunship, the story ends with a "Mission Complete" message; failure to do so results in a "Mission Failed" message. It is likely that Time Crisis: Project Titan takes place after the mission, if it was failed.

In 1997, an album known as Time Crisis Arcade Soundtrack was released. Another album, Time Crisis 3D Sound Ensemble, was released later than year. The latter contains audio dramas that depict events during or before the game, such as Miller's battle against Garo.

The game was met with positive reception, as GameRankings gave the PlayStation version a score of 85.50%. 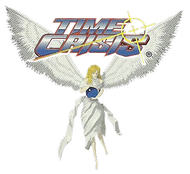 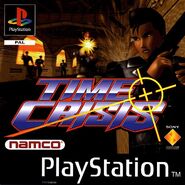 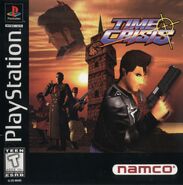 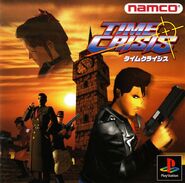 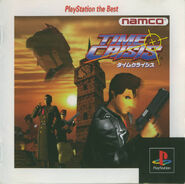 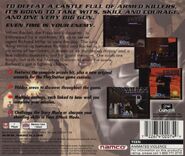 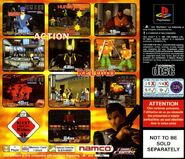 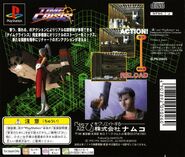 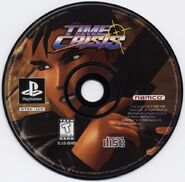 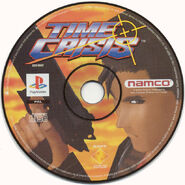 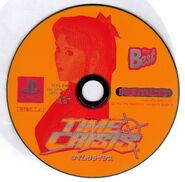 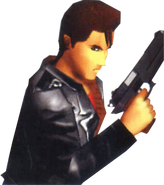 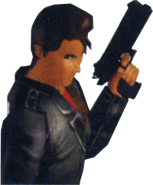 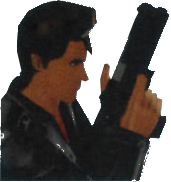 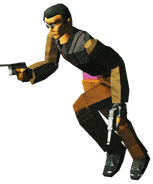 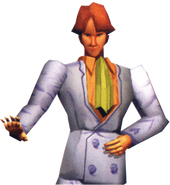