For easier recognition, crisis shots (enemy bullets that will damage the player) are now and slightly bigger than in the original Time Crisis. Subsequently, Time Crisis II and succeeding games have red bullets with a flash on them to indicate crisis shots.

Project Titan introduces a new gameplay mechanic in which the player can move to multiple fixed locations by shooting yellow arrows while taking cover. Like the WAIT sequences, the player will not be hit by enemy attacks while moving from one location to another. This mechanic would be refined in two future games: Time Crisis 4, whereupon the player can merely point the gun off-screen to move left or right; and Time Crisis 5, which uses two foot petals to allow the player to take cover and attack from different angles.

It's 2001. V.S.S.E.'s best agent Richard Miller has been framed for the assassination of Xavier Serrano, the president of Caruba. A videotape with evidence shows someone which looks like Richard with a sniper rifle on a nearby roof. Richard's bosses think he's been set up and they've given him 48 hours to find the real killer. If he doesn't, then they'll send him to the authorities. The Caruban law enforcement and feds already want Richard.

Miller's only hope left is to get hold of Marisa Soleil, codenamed "Abacus." She had contacted V.S.S.E. claiming she knows the assassin of Serrano. V.S.S.E. intelligence sources say she is being held captive on a yacht which belongs to Kantaris, the female arms smuggler. Richard must rescue Marisa first to clear his name. The yacht has already set sail into the Sea of Caruba...

Richard must rescue Marisa, uncover and stop "Project Titan"- an evil master plan which is a creation of mass destruction and a new level of terrorism, and reveal the true identity of the president's assassin.

Not only that, Wild Dog and his terrorist troops are also involved. Wild Dog isn't willing to retreat without a fight and this time he'll even prepare to double-cross his allies to prevent Miller from discovering the truth behind his plan.

Once again, the "One Man Army" finds himself in another 'Time Crisis'!

V.S.S.E. agent Richard Miller is framed for the assassination of Caruban president Xavier Serrano. V.S.E.E. has 48 hours to protect Miller before turning him in to Caruban authorities, and can only provide the location coordinates to a possible lead to clear his name: V.S.S.E. agent Marisa "Abacus" Soleil. She is located on a yacht owned by the Kantaris Organization, a criminal group.

Kantaris, the leader of the group, discovers Marisa's identity and has her interrogated by her security chief Zeus Bertrand. Miller infiltrates the yacht, killing Zeus and an assassin posing as a chef. After rescuing Marisa, Miller learns that Caruban kingpin Ricardo Blanco was who framed him. Miller and Marisa flee separate ways before Kantaris destroys the yacht with explosives.

Miller takes a flight to Caruba International Airport, fighting Blanco's men and escaping via a taxi cab. The driver escorts Miller to Blanco's mansion where a violent gunfight between Blanco and Miller takes place. Seeking answers, Miller disables Blanco, but before Miller starts interrogating him, Wild Dog -- who has survived his previous encounter with Miller, having replaced his missing arm with a gatling gun -- kills Blanco. A dying Blanco tells Miller that Wild Dog's headquarters is an abandoned nuclear research station on Rio Oro island.

Infiltrating Rio Oro and surpassing Wild Dog's elaborate traps, Richard discovers that President Serrano is alive, having been kept by Wild Dog as a bargaining chip after his death was faked. Serrano explains that Wild Dog and Kantaris plan to mine Caruba's rich titanium resources so that they can build mechanized battlesuits, under the name "Project Titan". Before escaping, Serrano gives Miller the project blueprints.

Miller acquires a speedboat and travels to the excavation site.Engaging the surviving mercenaries in the ruins, Miller is eventually confronted by Wild Dog, who leaves two Titans codenamed Deimos and Neimos to kill him. After destroying them, Miller battles Wild Dog and damage's his gun arm. A defiant Wild Dog activates the majority of his Titan army before escaping via helicopter. A few well-aimed shots from Miller disable the chopper, causing it to crash into the assembled Titans and destroy them.

His name finally cleared, Miller declines an award from President Serrano in favor of tracking down Kantaris. He is last seen driving down a lone road as the sun sets in the background.

Time Crisis: Project Titan was developed by Flying Tiger Entertainment, a third-party company in the United States, and was published by Namco as a PlayStation-only title (unlike other Time Crisis games that were released for the arcade first). The game took two years to develop. According to IGN, Namco opted to create a new game instead of porting over Time Crisis II since the specifications of the arcade version and the PlayStation system were so different.

Project Titan currently has an aggregate rating of 69% at Game Rankings. A major complaint about the game was the poor graphics. Ryan Davis said that the visuals were "badly outdated" and the animation "downright bad." Doug Perry simply said that it looked "old, dated, and bad" and that it didn't look any better than original Time Crisis PlayStation port.

In Japan, Famitsu magazine scored the game a 30 out of 40. 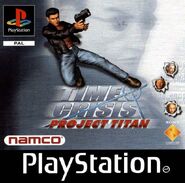 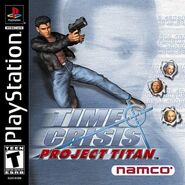 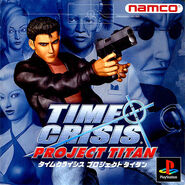 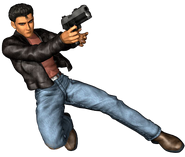