The compilation features the ports of three arcade games, namely:

Razing Storm
A spin-off of the Time Crisis series, the game takes place in a massively destructible environment in a South American country under a bloody revolution. Players, who fight futuristic terrorists and renegade soldiers, represent members of a special-forces unit called S.C.A.R. (Strategic Combat and Rescue), sent to capture the leader of the rebels, who masterminded an attack on the United States. The First Person Shooting Mode wraps up the cliffhanger from the arcade edition of the game and fills in some of the game's plot holes.

Time Crisis 4
A re-release of the fourth game in the Time Crisis series without the FPS mode, the game follows Military Intelligence Official William Rush in a mission to stop terrorists from utilizing biological insect-like weapons and any hidden agendas they may have.

A rail shooter game similar to the Sega arcade series, Let's Go Jungle! where the player is given unlimited bullets and a navigation system. The story details the Pirate's attempt to find Poseidon's Breath, a mighty Treasure Galleon with an extremely valuable trinket.

The compilation supports both the GunCon 3 light gun and the PlayStation Move motion controller system as well as vibration feedback and PlayStation Eye AV Chat.

In addition to the original arcade mode, new gameplay modes in Time Crisis: Razing Storm include a sentry mode, a story mode, and an online battle mode. In sentry mode, up to four players take turns trying achieve a high score by stopping prisoners from escaping in the penitentiary riot scenario. Story mode and online battle mode both feature a new first person shooter-style navigation, in which the player can freely navigate the environment "off the rails". In online battle mode, up to 8 online players can play together in any of a number of battle modes.

In addition to PlayStation Move support, Time Crisis 4: Arcade Ver. (based on the Arcade Mode from the 2007 PlayStation 3 release of Time Crisis 4) and Deadstorm Pirates both feature online ranking, and support 1-2 players.

This game also features escalated difficulty throughout the game especially if player keep alive without dying where player's reflexes will be more needed the longer player survives as critical shot will be fired more quicker than before.

For the bonus mission, player must wreck all equipment without any bias in order to acquire dog tags for the bonus mission. There are a total of 10 dog tags from stages 1 to 3 (four in stage 1, three in stage 2 and three in stage 3) and the bridge durability will be capped based on how many player are able to found the dog tags throughout the stages. Initially started with 20% and each dog tags increased durability by 8%. Finishing this mission without having the bridge destroyed will allow you to advance into Stage 4, failure will immediately end the mission. 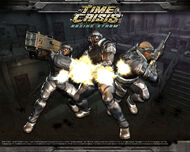