Time Crisis 3 (タイムクライシス3, Taimu Kuraishisu 3?) is the third installment from the Time Crisis franchise. Like the previous game, Time Crisis II, it allows two players to cooperate in a link play environment.

It has the signature pedal system for hiding and advancing and the first in the series to introduce the weapon changing mechanic. It was later ported to the PlayStation 2 and mobile phones, including iOS.

The game incorporates a new type of weapons system allowing the player to switch between the standard Smith & Wesson SW99 9-round handgun, a fully automatic Ingram MAC-11 machine gun that can hold 200 rounds, a Remington 870 shotgun with 50 rounds, and a Webley No. 2 Mark 1* 5-round grenade launcher with powerful splash damage.

Only the handgun has unlimited ammunition, though players can shoot yellow-clad soldiers to gain ammunition for their other weapons. The game also refines the crisis flash system, in which life-threatening shots are brighter, making it easier to identify the crisis shots from pedal-releasing advisories.

This title was later released for the PlayStation 2, together with a side story featuring Alicia Winston as a player, who is only an unplayable supporter in the arcade version of the game. Gameplay for Alicia is for the most part, the same as the regular campaign, with occasional sections which the player uses an Accuracy International Precision Marksman Sniper Rifle to deal against enemy snipers. For those sections, players zoom in to shoot and move the scope. The scope has arrows indicating direction of movement and turns red for enemy shots. To dodge enemy shots while in sniping mode, players zoom out of the scope. In addition, there are two stages (Stages 11 and 14) which the player only has 5 seconds to shoot an item with only 1 shot. Miss the shot or run out of time in those two sections will result the player having to use a continue to restart.

Unlike Time Crisis and Time Crisis II, the home console port features plot elements, features, and weapons not found in its arcade counterpart. As with the PS2 version of Time Crisis II, players can access the Crisis Mission exercise mode through prolonged gameplay.

Maximum ammunition capacity at levels 1 to 5:

Like the arcade mode, the player will lose one life when they run out of time, shoot a hostage or civilian, or when they are damaged by red-flashed attacks like: when they get shot, blasted by grenades or rockets, slashed by axes, clawmen, frogmen, knives or swords, caught in a fire by flamethrowers, and hit by objects or physical attacks. If all lives are lost in rescue mission mode, the player will have to restart the entire area instead of continuing from where they are defeated.

Enemy endurance is updated in the form of lifebars (first introduced in Crisis Zone). Enemy soldiers, machine weapons and vehicles, which require multiple hits to kill or destroy (e.g. "Armored" class soldiers, frogmen, clawmen, and "Specialist" class soldiers of flamethrower type) have lifebars. Green lifebars represent enemy soldiers' life while red lifebars represent machine weapons' (e.g. machine guns and cannons) and vehicles' (e.g. jeeps, combat submarines, and tanks) life. For bosses, they have more than one lifebars. A blue lifebar represents the boss will not be killed, but stunned when depleted to zero. When they are on their last lifebar, the color for it will be green. The lifebar will show when the player lands a hit on the enemies, machines or weapons with these lifebars. For the boss, if a lifebar is not shown, the boss is invulnerable but the player can continue shooting at the boss while at that mode to earn more points.

The number of lifebars for the bosses in arcade mode are:

The number of lifebars for the bosses in Rescue Mission mode are:

It's the year 2003. Lukano, a small country facing the Mediterranean Sea, was under the crisis of the invasion of Zagorias Federation Army from the nearby nation Zagorias. The Lukano Liberation Army has been continuing tough battles against ZFA. They caught information that the ZFA distributed tactical missiles in the Astigos Island. If this information is true, it is a fatal disadvantage for Lukano. Daniel Winston, a young leader of the LLA and an elder brother of Alicia, organized a special task force with some soldiers, his co-leader Jake, and himself to confirm the existence of the missiles and destroy them. They sneaked onto the island but caught by ZFA. The war seemed to end with the Zagorias Army winning.

On the other hand the range of the tactical missiles in the Astigos Island covers neighboring countries in the region. V.S.S.E., anxious about the confusion of the world, decided to send two agents Alan Dunaway and Wesley Lambert.

Alicia, hearing her brother has been taken prisoner by the Zagorias Federation Army, sneaks onto Marano Beach at night alone to rescue him. Armed with four conventional weapons and her sniper rifle, along the way she must combat the Zagorian forces along side with Alan and Wesley.

One morning in the Mediterranean coast, Giorgio Zott, leading the Zagorias Federation Army invades and occupies 80% of Astigos Island after three months of invasion despite protests from other nations. The Lukano Liberation Army soon discovers that the Zagorias Army had placed tactical missiles onto Astigos Island, but Lukano's investigators are kidnapped by one of the Zagorian Forces. Eventually, Daniel Winston and second in-command Jake Hernandez, leaders of the Lukano Liberation Army are also captured. Daniel's sister, Alicia, goes on an overnight attack at Marano Beach only to find out that Lukano's suspicions were true.

This prompts Alicia to leak the information to the V.S.S.E., in which they dispatch four-year agents, Alan Dunaway and Wesley Lambert, to remove what they believe is a threat. Alan and Wesley are nearly killed twice by Victor Zahn, an enemy in a VTOL, they are rescued by Alicia, then the 3 of them battles Zahn in a car chase, and defeats him with the bomber going down in flames, and then exploding. Soon, she directs them to the area where the missiles are located. However, an ambush by Zagorian forces separates Alicia from the agents, who then proceeds to the missile silo. During this time, Alicia meets up with Jake, who tells what happened to he and Daniel, saying that he was the only one to escape with an evil grin on his face.

Discovering that he betrayed Lukano and the resistance for the love of money, she battles him with Zagorian forces and civilians around the streets, defeats him, and then tries to ask him where Daniel is, but he manages to escape, running away in a Jeep. Later, Alan and Wesley rejoins her on a train to the missile base. The group is nearly killed when another one of Zott's henchmen, Randy Garrett, destroys a bridge and almost fall into a chasm. Alan and Wesley battles Garett, while Alicia kills enemy snipers from the far right of the bridge that are about to kill both of them, soon Alan and Wesley kill Garett, causing him to fall into the chasm, and all of them safely reach the missile base. Here Alicia and the agents spot Daniel and Zott on top a tower. They soon split up again, with Alan and Wesley fighting Wild Dog and his new apprentice, Wild Fang.

After Alan and Wesley defeat "the Wild pair", Wild Dog appears to commit suicide by once again detonating himself. They catch up to Daniel, but is caught by Zott, threatening them to drop their handguns or else he's killing Daniel. Up at the tower again, Alicia rescues her brother by sniping Zott's gun out of his hand, and rescuing the soldiers captured by the Zagorian Army. Soon, Alan and Wesley engage in a fight against Zott inside the missile base. After they kill him, the missiles launch. They use Zott's rocket launchers to stop the missiles by firing at the roof of the base and safely burying them, almost at the cost of their lives. At the same time, Alicia battles and ultimately kills Jake, who had attempted to escape with a nuclear warhead, restoring dignity to her army. In the PS2 version, the game's true ending is revealed: their mission complete, Alan and Wesley leave Astigos Island, which the resistance army is able to liberate by returning 90% of the island back to the Lukano governent in just one month of conflict and force the Zagorian Federation Army out of the nation for retreating, putting an end to the Mediterranean crisis.

The game was later ported to the mobile phones with the name Time Crisis Mobile (3D) and later re-ported in 2009 to the iPhone OS, as Time Crisis Strike.

The game was met with positive reception upon release. GameRankings gave it a score of 81.21%, while Metacritic gave it 81 out of 100. 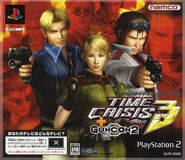