Time Crisis 4 (タイムクライシス4, Taimu Kuraishisu Fō?) is the fourth installment in Namco's Time Crisis series which introduces new features to the cover-based light gun shooter gameplay engine of its predecessors alongside a new story and roster of characters. It was initially released as an arcade game in 2006, and was ported in 2007 for PlayStation 3, with the GunCon 3 light gun peripheral and features a new first-person shooter mode. It was later re-released as part of Time Crisis: Razing Storm with support for the PlayStation Move controller but without the first-person shooter mode.

Like Time Crisis 3, this game includes the multiple weapon system, with the STI's M1911 handgun, HK G36C machine gun, Mossberg 590 Compact Cruiser shotgun, and M79 grenade launcher. On several occasions, the player is equipped with a Browning M3 heavy machine gun, Mk 19 automatic grenade launcher or M249-E1 SAW with limitless ammo or a Mk 12 SPR sniper rifle (2 rounds per reload) used to shoot the tires on a marauding truck. On multiple occasions, William Rush appears onscreen, whether caught in a trap or attacking an enemy as a diversion, and care must be taken to avoid shooting him as 1,000 points is deducted per shot on Rush. This also changes the penalty of shooting player characters by accident with 5,000 points being deducted per shot on the other player character.

This combo hit system is determined by a gauge which has red and green parts. The red part is constant at 50/60 seconds while the green part increases by 1/60 second for every 12 continuous chase shots on foot soldiers up to a maximum increase of 100/60 seconds and will be kept as the game goes on. However, the green part resets to 0 if players loses all lives and decides to continue from their last point. The gauge depletes if no hits are made over time and the resulting amount of points will be added to the score after the gauge is completely depleted.

The time bonus is increased from 20 points for every 1/60 second saved to 40. Secondly, the maximum cap of 99,990 points earned via time bonus per area is removed. Thirdly, the timer is no longer fixed for all areas in the entire game. E.g. The Prologue has 60 seconds per sequence but Stage 2 Area 1 has 40 seconds per sequence. Finally, failing any screen battle will cause all the points via time bonus in that area to be lost in addition of losing one life unit.

Some enemy soldiers, machine weapons and vehicles, which require multiple hits to kill or destroy have lifebars. Unlike Time Crisis 3, they all have green lifebars (In Time Crisis 3, green lifebars are used on enemy soldiers and red lifebars are used on enemy machine weapons and vehicles). The Boss battle's lifebar system is refined with the number of lifebars clearly shown. It also refined boss invulnerability (first introduced in Time Crisis 3 on Giorgio Zott's final lifebar) with green and orange parts on lifebars. E.g. Marcus Black has green and orange parts on his x6 lifebar. Green part can be depleted by the player while orange part indicate boss invulnerability albeit the player can continue shooting at the boss while at that mode to earn more points. This is especially useful when the player battles Jack Mathers where his lifebar cannot be depleted until he picks up his twin machine gun and shoots the player once again after defeating Rush in a brawl fight. The red lifebar only shows when the boss is on their final lifebar except for Jack Mathers where the green and orange parts can be seen during the final brawl with Rush until he picks up his machine gun again to shoot the player for the last time.

The number of lifebars for the bosses in Arcade Mode are:

The number of lifebars for the bosses in FPS are:

A new biological weapons threat has been discovered in the USA, called "Terror Bite", which has gone into the hands of a terrorist organization. Two V.S.S.E. agents, Giorgio Bruno and Evan Bernard, have been dispatched to investigate the situation, first stop in California. While battling terrorists, they meet Captain William Rush of the US Joint Intelligence Division who assists them. Little do they know that these terrorists have more to them than meets the eye...

The U.S. Army's Internal Surveillance Group (ISG) has learned that a top-secret weapon developed by the armed forces is about to fall into the hands of the European terrorist organization known as W.O.L.F. In response, the ISG instructs Captain William Rush to head to California and investigate the incident. Arriving at Pier 5, the enemy's purported hideout, Captain Rush finds himself face to face with unimaginable enemy forces and menacing biological weapons. Meanwhile, having received similar information, the European Union dispatches Giorgio Bruno and Evan Bernard, two agents from the V.S.S.E. International Intelligence Agency. Upon their arrival in California, however, the pair is ambushed by a mysterious military force...

The game opens in California, where intelligence officials from both the U.S. Military and the V.S.S.E. learn about a top secret weapon targeted for terrorists' smuggling and their plans. William Rush infiltrates a pier to gather more information, finds that the enemy has already acquired the insect-like weapons (codenamed "Terror Bite"), and from the handset device obtained from the defeated Terrorist Leader, they are going to have a weapon trade-off in the afternoon at San Francisco. After being told by Elizabeth Conway about an information leak incident at the airport, Rush heads to the airport to help V.S.S.E. agents Giorgio Bruno and Evan Bernard advance further to stop a truck shipment of Terror Bites and defeat all enemies. They discovered U.S. Army dog tags on the enemies' bodies which reveal that the terrorists are soldiers like Rush himself.

After Rush found out about the terrorists' identities (The Biological Weapons Special Operations Unit, AKA the Hamlin Battalion), he was forced to thwart the enemies' plot to occupy Dam #18 in California alone. After having to put up with the battalion's destruction at it, Rush, Giorgio and Evan arrive at a secluded bio-weapons research facility in Wyoming only to discover the Terror Bites are all gone. Elizabeth Conway then tells the men that the Hamlin Battalion attacked Buckley Air Force Base near Aurora, Colorado, prompting the men to rush to the AFB. As Rush, Giorgio, and Evan invade there from the outside, a couple of Unmanned Combat Air Vehicles (UCAVs) departed the base without warning. The Colorado National Guard has already been deployed but is little help against the Terror Bites, so Rush decides to lead the Guardsmen toward an entrance while Giorgio and Evan try to take care of the UCAVs, when the mercenary Wild Dog also appears and attacks the two agents by using a grappling gun to snare the helicopter, forcing them to defend themselves. After they land their helicopter safely, they pursue Wild Dog (whose arsenal has a tractor beam with which he throws detritus at the player) into the base and defeat him, ending with Wild Dog detonating himself for the fourth time. Rush encounters and defeats Wild Fang, Wild Dog's younger partner from the previous game, ending with Wild Fang being hit in the back by a UCAV.

Gregory Barrows is the one behind the stealing of Terror Bites who ordered the nuclear-armed stealth bombers to destroy the United States in a retaliation scheme for the poor treatment he received from the U.S. Military. After Gregory Barrows blows up the stairs to the control panel, Rush orders the National Guard soldiers to form a human ladder for the V.S.S.E agents to climb up. After Gregory Barrows is defeated, Rush gives the V.S.S.E agents the final lift needed to get to the control panel, where the agents press a big red button on the control computers which self-destructs all nuclear missiles that the UCAVs have already launched.

The game was first shown at E3 2006 prior to its recent final revision arcade release. One major change is the addition of the multi-screen or multi-hiding system, introduced in Time Crisis: Project Titan. Unlike Project Titan, which players went on the offensive, players are placed on the defensive. In Time Crisis: Project Titan, players had to hide and shoot arrows to switch screens. Screen switching has been refined to allow the player to merely point the gun to the left or right of the screen to move around. The game also utilizes a new light gun control with infrared emitters. Prior to this, all Namco light gun games used gun controllers that relied on cathode ray timing. Because Namco's light guns with cathode ray timing utilized memory chip-to-lens pointing, the arcade cabinet designers had to ensure that the infrared-emitting light gun controllers would provide the same accuracy as their cathode ray timing-based gun provided in the past. This delayed the game's release given past accuracy issues with IR light guns. The player can choose to customize gun calibration and/or turn the blowback on or off with a pre-game code explained in the cabinet. The game, like its predecessors is available either in a 29" standard twin cabinet or a 52" deluxe twin. It also features a voice navigation system that guides players through different situations. Given the voice navigation system, it can be voiced either in Japanese or English. Prior to the game, it was voiced exclusively in English.

The game was released for the Sony PlayStation 3 exclusively bundled with the GunCon 3 light gun peripheral. The release dates are as follows:

The PlayStation 3 edition features 480p (4:3) and 720p (16:9 widescreen) support and a specially-programmed first-person shooter mode, which players engage combat similar to a typical FPS game, but with manual gun pointing, aiming, and firing, in addition to the arcade mode. Players play as Captain William Rush for 5 levels and as V.S.S.E. agents Giorgio Bruno or Evan Bernard for 10 levels through the game's "Full Mission", complete with arcade footages when playing as Giorgio or Evan. Much like its predecessors, it features Crisis Missions. The Crisis Missions has some backstories, starring characters from previous Time Crisis installments.

The game received mixed reviews, with an average GameRankings score of 60.33%. GameSpot gave the game a 5.5 out of 10, while Jeff Haynes of IGN gave it an 8.0 out of 10, concluding that it is "a fun game for any shooting fan looking to blast away with their PS3." Matt Miller of Game Informer, however, was more critical of the game, giving it a score of 4.25 out of 10, criticizing its first-person shooter mode, "ludicrous plot", and shooting mechanic. GamePro rated Time Crisis 4 a positive score of 4 out of 5, saying the games plays just like the arcade, but replayability is an issue. G4 TV also gave the game a score of 4 out of 5.

One of the main key areas was the Guncon 3 controller included with the game. Chris Remo of Shacknews stated that it uses "two analog sticks for full movement and camera control, with pointer-based aiming on top" and that once "you get accustomed to it, this control actually works just fine, and feels like it could be the basis for its own game." According to Miller, however, the controller "feels cheap," with analog sticks that are "chintzy and hard to use"; referring to the left-hand subgrip which forces the main shooting handgrip to be held with the right hand, Miller claims that the Guncon 3 "hardly accommodates left-handed players." Ryan Davis of GameSpot expressed that the complexity of the control scheme seems to contradict the pick-up-and-play mentality of the light gun genre. 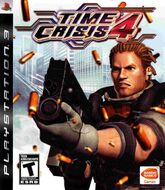 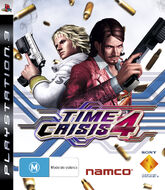 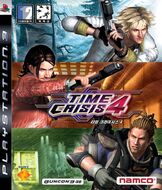 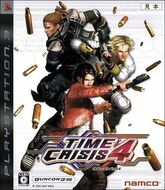 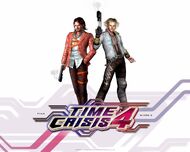 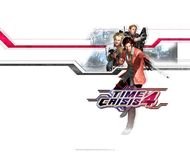 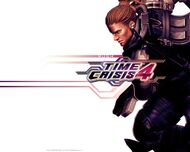