Wesley Lambert (ウェズリー・ランバート, Wezurī Ranbāto?) is one of the playable characters in Time Crisis 3, regardless of the edition. Wesley takes control as Player 2.

Wesley has a short blonde hair with full-opened fringe and green eyes.

Despite he wearing no upper underwear, Wesley wears a black jacket with blue colors addition on top (including his collar), a light khaki pants and brown shoes. Wesley also wears a necklace with bone as a pendant.

Wesley joined the V.S.S.E. at the same time as Alan Dunaway, He was a proven marksman of the agency, He's a friendly, quiet, smart, reserved, and cheerful-looking man, and he currently holds a doctorate degree in engineering. Wesley is best known for his own unflappability in extreme situations, where he can make snap decisions strategically. Wesley is also a natural animal-lover/caretaker. Because he and Alan get along extremely well, they are different from other agents/teams.

Although Alan and Wesley were V.S.S.E. agents only for 4 years, they were already far and away trustworthy, as they were qualified to act as officers in a simulation fight for newer agents based on the Astigos Island Crisis. Both served as the final test newer agents (up until the Hamlin Battalion incident) must surpass as a part of the undeniably high amount of battery and aptitude of training agents must undergo before becoming fully-pledged V.S.S.E. agents. 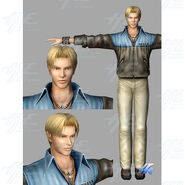 With Alan Dunaway and in civilian disguise

As a cameo in Time Crisis 4