Captain William Rush (ウィリアム・ラッシュ大尉, Wiriamu Rasshu-tai'i?) is one of the three main protagonists in Time Crisis 4.

Rush is of Irish American descent with brown hair and turquoise eyes.

Rush wears a military uniform which is a blue shirt whose sleeves are folded up to short-length and long blue pants, and brown combat boots. There is body armor over the shirt and knee pads over the pants. He also wears elbow pads and gray gloves. As for equipment, there is a goggle on the body armor, gun holsters attached behind the body armor which house his HK G36C assault carbine and Mossberg 590 compact cruiser, magazine holsters attached to the back of the pants, a sheath containing a knife attached to his lower left pant leg, and a gun holster attached to his right pant leg which houses his HK MK 23 handgun. There is a radio earpiece taped to his left ear and a watch on his left wrist (it is partially covered by the glove).

Rush comes from a long line of military-oriented families who pledged allegiance to the United States (his late father is a Lieutenant General). As a West Point Military Academy Graduate, Rush defined his own character on the battlefield as an important asset of the U.S. special forces. Throughout his service in the U.S. Army, Rush has served in Delta company and Task Force 11. Also, he is responsible for taking down a group of rogue U.S. Marines who has sided with a South American drug cartel. Serving as a member of the U.S. Internal Surveillance Group's Special Operations Division, Rush's patriotism and loyalty to his country is considered to be second-to-none personality although he can be stubborn and emotionless at any time.

Rush is called by his superiors Lieutenant General Larry Garfield and Brigadier General David Maxwell to investigate a hideout used by an European terrorist organization called W.O.L.F. (Western Order Liberation Front). The group is after a top secret military weapon, but the U.S. Army's Internal Surveillance Group (ISG) is unable to discern the weapon the terrorists are after or whom their contact is, leading the ISG to suspect that it is an inside job. After infiltrating the terrorist hideout in Pier 5, California, Rush discovers that the terrorists have already acquired the top secret weapon and from the handset device obtained from the defeated terrorist leader, they are going to have a weapon trade-off in the afternoon at San Francisco. After being told by Elizabeth Conway about an information leak incident at the airport, Rush heads to the airport to help V.S.S.E. agents Giorgio Bruno and Evan Bernard before advancing further to stop a truck shipment of Terror Bites and defeat all enemies, They discovered U.S. Army dog tags on the enemies' bodies which reveal that the terrorists are soldiers like Rush himself.

Back at the ISG headquarters, Rush questions his superiors about the identity of the soldiers he had defeated. Lieutenant General Garfield tells Rush that they are from the Biological Weapons Special Operations Unit, or known as the Hamlin Battalion. Soon after, Rush is forced to thwart the enemies' plot to occupy Dam #18 in California by himself despite it being a national emergency. This is because Brigadier General Maxwell is concerned about the reputation of the U.S. military being possibly damaged should the V.S.S.E, by extension other countries, will get involved in the operation if the methods used by the U.S. military to thwart the enemies' plot get out of hand.

While traveling by helicopter to the dam, Rush is informed by Elizabeth Conway that there are anti-aircraft weapons along the flight path, causing him to travel by foot through a forest to reach the dam. After he destroyed all the anti-aircraft weapons and defeated the enemies, Rush defeats the occupation leader, Frank Mathers who responds by destroying the dam via explosion. Barely escaping from the collapsing dam, Rush discovers from the recovered data found in a hard disk that the occupation of the dam is nothing more than a distraction so that the main unit could steal a large number of Terror Bites from a military research facility. With no leads on the use of the Terror Bites and defeating the Hamlin Battalion being too much to handle by himself, Rush considers deploying a military unit which is rejected by Brigadier General Maxwell who fears that the existence of the Hamlin Battalion will be made public. Rush then requested for the assistance of the V.S.S.E. agents. The request is accepted after Lieutenant General Garfield assured Brigadier General Maxwell that he will take full responsibility for his actions.

While heading to the military research facility in Wyoming, the helicopter is shot down by anti-aircraft weapons, forcing Rush and the V.S.S.E. agents to travel by foot through a cave and a national park to reach the research facility. By the time the enemies along with their leader, Jack Mathers, are defeated, the Terror Bites are already gone. Elizabeth Conway then tells the men that the Hamlin Battalion attacked Buckley Air Force Base near Aurora, Colorado, prompting the men to rush to the base. As Rush, Giorgio, and Evan invade there from the outside, a couple of Unmanned Combat Air Vehicles (UCAVs) departed the base without warning. The Colorado National Guard has already been deployed but is little help against the Terror Bites, so Rush decides to lead the Guardsmen toward an entrance. While advancing inside the base, Rush re-encounters the V.S.S.E agents who have earlier defended themselves from Wild Dog (who used a grappling gun to snare the helicopter in an attempt to crash it into a tower) and landed their helicopter safely. While moving along, Elizabeth Conway informs that Wild Dog is inside the base. The V.S.S.E. agents decide to go after the mercenary, leaving Rush and the National Guard soldiers to go on a different route. While Rush defeats more enemies inside the base, Wild Fang, who has installed a tractor-beam device onto his right leg, challenges him to a man-to-man fight. The fight ends with Rush defeating Wild Fang, knocking him into the path of a UCAV.

With Wild Fang defeated, Rush and the National Guard soldiers arrive at the lowest section of the base, defeating more enemies. After Gregory Barrows blows up the stairs that lead to the control panel, Rush orders the National Guard soldiers to form a human ladder for the V.S.S.E agents to climb up. After Barrows is defeated, he gives the V.S.S.E agents the final lift needed to get to the control panel to stop the UCAVs. 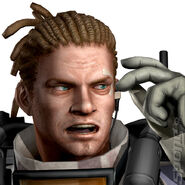 "Stop those UCAVs at all costs!"